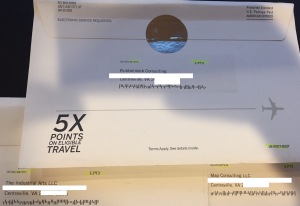 A couple of days ago, I was reminiscing about a great piece of direct mail I received last year.

Yesterday, I received the opposite.

This falls under the category of a merge/purge fail. As you can see here, there are three companies at my address as follows:

From the codes on the pieces, each of the three entities got the same mailing.

On the positive side, the address was correct. But why AmEx would send three solicitations to one SFDU (single family dwelling unit)? The “LLC” designation of two of those entities and the fact that only one of them has a DUNS number should immediately ID the address as a very small home-based business or single proprietor.

One other thing they should have noticed. I used to have an AmEx Platinum card. When the service became laughably poor and I balked at paying $450 per year for the privilege of carrying a card that few accepted, they told me “don’t let the door hit you in the ass” and cancelled me immediately with no save offer of any kind.

What I think AmEx should have done:

It’s possible that AmEx has test results that prove it makes sense to hit a single address with three overweight B2B solicitations on the same day.

I suspect the easier explanation might be correct. They messed up the merge/purge logic and nobody was paying attention to the output.

Takeaway: If you’re going to do direct mail–and I think you should at least test it–make sure you have somebody that knows how to run a merge. Run the basic reports your service bureau offers. Eyeball the output. And win.